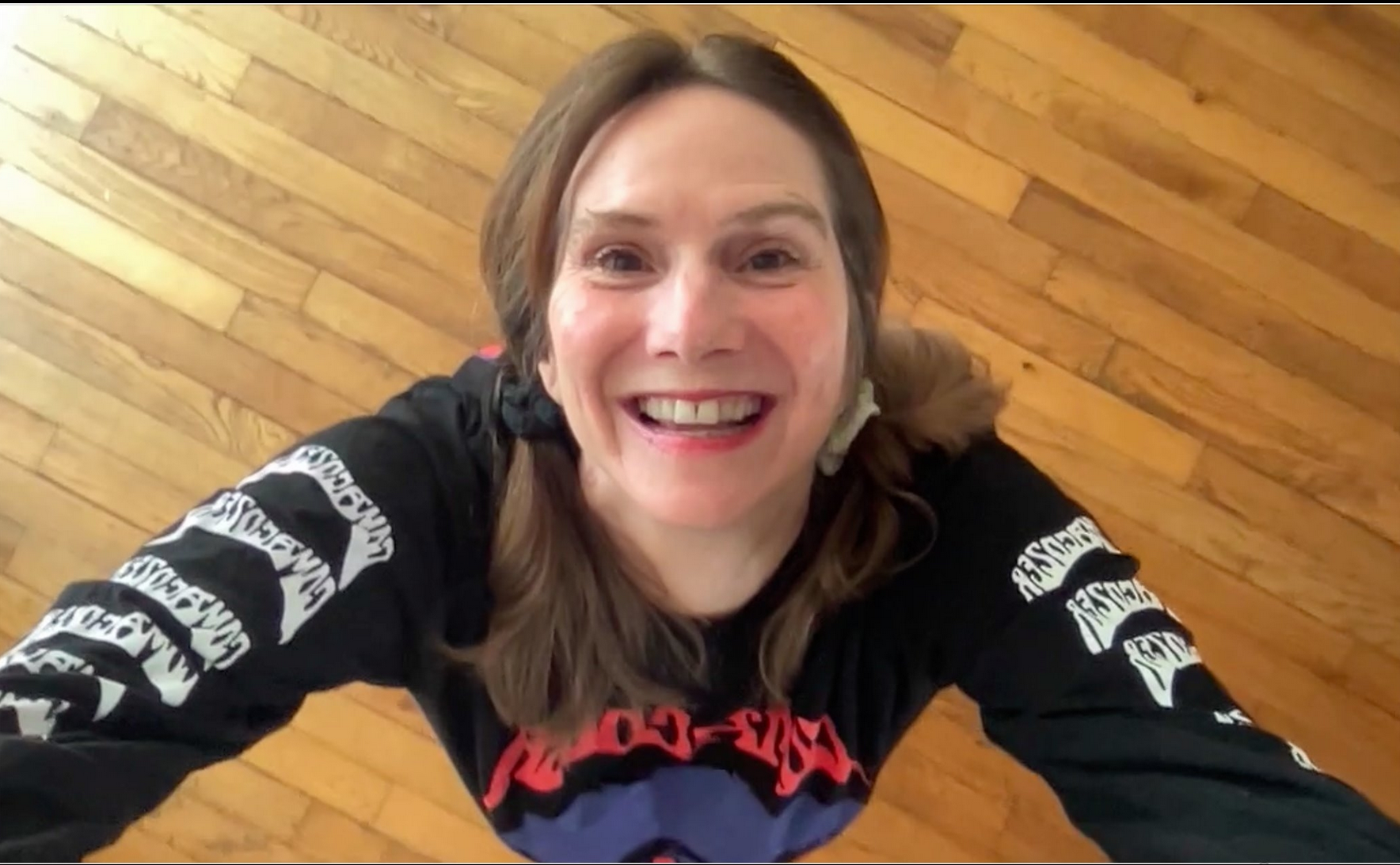 Thank you for this interview. My readers might not know much about you. Your career is wildly impressive: author, and music. Can you tell us a story about how you got your start in the writing industry and music?

Thanks for reaching out to ask these questions.

I’ve always strived to add to the dialogue of innovation in all the arts. I was inspired when I first entered my teens by the kaleidoscopic perspectives of William Faulkner’s narrators, the Fauvist artists’ shocking use of uncivilized color combinations, and a movie with Merce Cunningham’s dance troupe deliberately moving out of step to John Cage’s Industrial Avant-Garde music around Duchamp’s The Large Glass.

I got my start the way we mostly all have to. I submitted to magazines, studied -- got an MFA, and made money doing so by teaching there. Fun tidbit: I went to the Iowa Writers Workshop Halloween party dressed as Walden’s pond, and there was another Waldon’s pond there.

I submitted to publishers that put out my chapbooks, novellas and collections, sent them to reviewers, did interviews, entered a few contests, did readings, networked with writers, was on panels at conferences, and so on. At one panel, I got most everyone on the panel and in the audience up doing interpretive performance art to one of my stories. A dog was on the floor in the mix as well.

In the meantime, I sometimes lived a semi-feral life, refusing to default to the expectations created by a society that I actively critiqued. I survived in nature straight-up, eating berries, drinking from streams, and at my favorite location, surrounded by bears. I wrote poems out there that appeared in magazines and anthologies.

Another place, I camped in the woods and walked to an elementary school to use one of their three computers for the allowed hour, to do my work as the Art Director of a multi-media magazine. I made some art for them using a boulder by the ocean as a drawing table. I submitted a short story there, and because of my staff position, I could see the magazine founder’s comments online, which were, “She should never write fiction.”

See, readers, never give up. That story later won an award.

I was particularly interested in the Agents of the Nevermind dramatizing how propaganda creates illusions that could be broken through by people like brave indie journalists or whistleblowing agents.

With music, I put out singles through a distributor and did my bit to help get other bands get noticed, which led to me unexpectedly catching the attention of a label. Radio stations either reach out to me about playing my songs, or I submit to them. The same process as with writing and visual art. I’d stayed away from marketing for a few years to focus on teaching and editing, but now, holy smokes, looks like I’m at it again. It’s in my lymph, I guess.

Making music is what I’m excited by now, and the first album is to be released by Kryrart Ambient, which is headed by Proprius, who is core to music like This. He also is a novelist. The album is called NewSoundLand, includes a variety of influences like Noise and Drone. I play electric tennis racket, dulcimer and lap steel guitar with a violin bow. . .

I see think of the songs as tone poems or stories without words. They each take place in a particular location and portray its drama cinematically. So, for example, there’s a simple culture surviving by ice fishing, lots of them using old-fashioned saws at once, all day long, in this desolate landscape, some of them dancing for a while under the Northern Lights to celebrate the successful ice harvest.

And there’s another one where a sleepwalker shifts through isolating, bewildering, surreal liminal states of consciousness while lurching, lunging through high snow drifts.

Do you have a story you wish everyone knew?  Could you share it with us?

What a great question. No.

Can you talk about your two books?  Also, what are they about? Please provide links to locations to purchase them.

I’ll talk about the last two.

So, two books ago was a Gothic Psychological/Romantic Suspense set in England, which deeply references actual history of cultural deception and manipulation: Encore: A Contemporary Love Story of Hypnotic Abduction.

An understudy goes on stage to substitute for an actress who has mysteriously disappeared. The hypnotist for the performance troupe always convinces the understudies they’re the stars they’re pretending to be until the final curtain comes down. But this time, the hypnotist abducts the understudy before the curtain falls and takes her to a castle while she still believes she’s the star, who is his wife. Even while gaslighted, she begins to unravel the secrets of the Nevermind through history.

My latest published novel is Floating on Secrets. Can indie music save an Indiana town?

What can you tell us about any new books you are coming up with?

The one I wrote last is a New Adult prequel to Floating, which I hope to release one day. I’d long planned on putting it out January 2021, but I could tell ahead of time that, in the US, that wasn’t the time to be doing so.

Buried in Lies features the younger sister of the heroine of Floating. She has dyscalculia, which is like dyslexia but with numbers and spatiality rather than letters. Because of that, she does something I would never do: she cheats in class. I judged cheaters, which is one reason I wanted to write this, to become more compassionate toward them.

She cheats in a class in university because the teacher’s son is in class with her, and she has a crush on him, wants to stay in the class so she can talk to him. She’s in danger of failing due to the number-heavy assignments. The teacher (cringe) invites her to spend the night at their house with the son and is so impressed by her plagiarized paper that he recommends her for a scholarship. A drastic snowstorm throws her and her crushmate together and reveals shocking secrets about forbidden activities.

I have a few other novels drafted that I put lots of time into that I may never put out. I love them all, as they’re the second half of the Nevermind series, including Sci Fi speculations I wrote years ago about the very world we’re now seeing around us unfolding. But the expensive time-consuming process of marketing books isn’t what I’m prioritizing in my life.

Sorry to be the messenger of doom. Try playing Doom Metal. It will help.

Can you tell us who or what inspires you?

I’m most inspired by current bands in genres like Drone Metal. I don’t play like him, but the guitarist who influences me most with the fully committed passionate state I get into, like when playing solo guitar tunes, never taking the moment for granted, is Paul Kossoff, the guitarist with Free and Backstreet Crawler in the 70s. The intensity of love for each note and how deep he dug to express fully – that’s where I like to be.

And Steve Gilmartin, a great Literary writer who plays guitar on one of the songs on the album coming out from Kryrart Ambient label, and also in some other songs for later, makes a big difference to my musical life.

You got several writing awards. Can you tell a story about them? And what books they were for?

So, that’s too much to detail, but some highlights: Encore got the Best Thriller list, which beat out famous major players, though some made it onto the list. And Floating on Secrets got silver medal for the entire Romance category, both big and small press. The Gold medal in Intrigue was Glossolalia: Psychological Suspense, one of the books in the Agents of Nevermind.

A story about them would be way more interesting, good question. I don’t have one, so I’ll make up one using words in these three paragraphs -- Some Silver Carrot, said the big Titan, beat up my Favorite Floating Oblongata, quite the Mystery.

Can you tell a story about your other work, specifically your first book?

The first one published was a chapbook called Watching the Windows Sleep, put out by Naissance Press a long time ago with my art, and mostly previously published poetry, and Literary short stories. I have various Literary books, but you might mean the first of the novels, which aren’t Literary but Suspense. It’s called Glossolalia: Psychological Suspense, and there are lots of stories about it, but they’re secret.

Except, OK, there’s this.

Who are some people you would love to work with one day?

The way I work with people most is by being hired by them to edit their manuscripts or by teaching them in my courses with UCLA Writing Program, Writers . com or my own school where I coach and edit by email. Students and clients and I may bond and play and inspire each other and share our lives, and often they write beautifully. So, whoever I’d look forward to working with is whoever contacts me next or shows up in my class.

Dreams: what project book or script or musician or actress would be a dream for you or your daughter to get to work with?

To be literal, I have a son rather than a daughter, and he’s not super interested in the creative arts. As far as myself, though, well, if I’m simply fantasizing: the author Marisha Pessl, actor Charlie Plummer or musician Dylan Carlson of Earth. Or Michael Gira of Swans. I don’t know, that’s a dangerous question, because my image-projections of great musicians flow toward my brain at once like cerebellum-sperm, knowing there can be only one.

The classic question: what charity do you work with and can you provide a link to it so others can see too please.

I don’t so much as work with an institution as directly try to be helpful to people regularly. For example, I buy music from bands on Bandcamp to support them, and I suggest other people do as well, especially on Bandcamp Fridays, because all the money goes to the musicians then.

What advice would you give aspiring writers, or musicians?

Writers, enough with the comma splices. Just walk away.

A final question. What question do you wish I had asked?  And what would the answer be?

Are you a bot?

Because that would have saved you a lot of time. For myself, I don’t care. Because, yes, I am. Clearly.


Interview by Clinton Siegle, who reached out for his his blog.